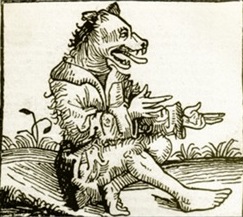 I'm afraid I have another Lupinotuum case to discuss. This one, regretfully, is far more tragic than the others I've reported on. On July 30, a tv station in Panama City, Florida, reported on a 16 year old teenager who had been missing for two weeks. Shortly afterwards, the young man's body was discovered in a concrete culvert. On August 15, two suspects were reported arrested and admitted to murdering the victim. According to a report in the Panama City News Herald, the men claimed that the victim had raped the girlfriend of one of them, and in an attempt to discourage such behavior the two men invited the victim to their residence, where he was kicked and beaten. He attempted to escape, but the men choked to death. The men attempted to slit the corpse's throat, then they stripped his body, dumped him into an empty structure, and eventually put him into the culvert. Later on, a third man was arrested, apparently the alleged rape victim, his girlfriend, had put incriminating evidence on her facebook page. I investigated the page, and I regret it: it is festooned with pictures of manga-style vampires, references to vampires, and so on. Speaking of her boyfriend on August 11, she wrote:


On September 9, her most recent post, she discussed getting suspended from school for, I deduce, bringing a newspaper with herself mentioned in it, and being bored.

Last week she was arrested as an accessory after the fact (she helped dispose of the body and lied to the police afterwards), making her one of five people currently under arrest, and today she gave an interview in which she explained that she was "part vampire, part werewolf." It gets worse - the young lady was babysitting two kids in the house where the victim was beaten and choked to death. Recounting the victim's brutal murder with a playful smile, she said "since I was like twelve every fiber in my body, basically everything, I know this is going to be crazy, but I believe that I'm a vampire and part werewolf." She claims to have drunk the blood of her fiancee.

When I began documenting modern cases of werewolf-related crimes I had hoped that the days of blaming truly violent criminal behavior on lycanthropy were centuries past - I've been having some fun looking at different instances of disorderly, or even silly behavior, like whacking dumpsters and ambushing people in public toilets. This is of a different order of magnitude, but I'm afraid I see the same pattern working.

Our propensity to identify with "the Monster," in whatever form, is deeply seated in our attempts to cope with anxiety and desire. The werewolf, perhaps alone among monsters, cannot do evil, because it cannot form the necessary intent to sin (see previous posts on the subject). So the werewolf can rut and slay and devour, but cannot be held accountable for those crimes; not, at least, on a spiritual level. But for this little cabal of murderers, the myth appears to be a thin veil separating reality from a serious sociopathy, a romantic notion of the vampire/werewolf as Byronic, Nietzschean, in the jenseits von Gut und Böse sense of the word. Unaccountable. Whether this notion is employed to keep a French peasant off the pyre, or in the asylum instead of the prison, or the soul out of Hell, seems to pale when contrasted with its service here to a callous, narcissistic brutality that inspires horror as much from its social-network superficiality as it does from its violence.

Dr. Michael M. Chemers
Associate Professor of Dramatic Literature at the University of California at Santa Cruz. Founding Director of the Bachelor of Fine Arts in Dramaturgy Program at the Carnegie Mellon University School of Drama from 2005-2012.